VIDEO: Kendall Jenner shows off her backside in leopard-print bikini

The 23-year-old Vogue model slipped into a leopard print string bikini with a matching hat as she posed for a selfie inside a luxurious bathroom.

The sister to Kylie Jenner wrote in her caption, 'Sunday's for the girls.' 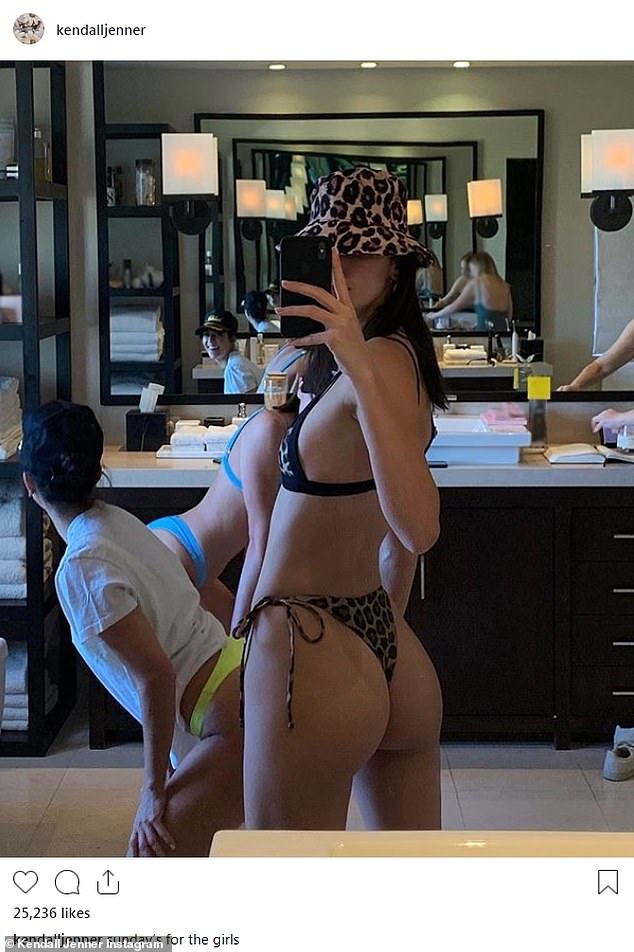 Ready to swim: Kendall Jenner was enjoying the mini heatwave Los Angeles experienced over the weekend. The Vogue model slipped into a leopard print string bikini with a matching hat as she posed for a selfie

All eyes went to Kendall as she was flashing plenty of flesh. But on closer inspection two of her pals could be seen.

One of the women is sister Kourtney Kardashian, 39, who had on a neon green bikini bottom with a white T-shirt.

She piled her hair under a baseball cap and looked into the mirror with a big smile. 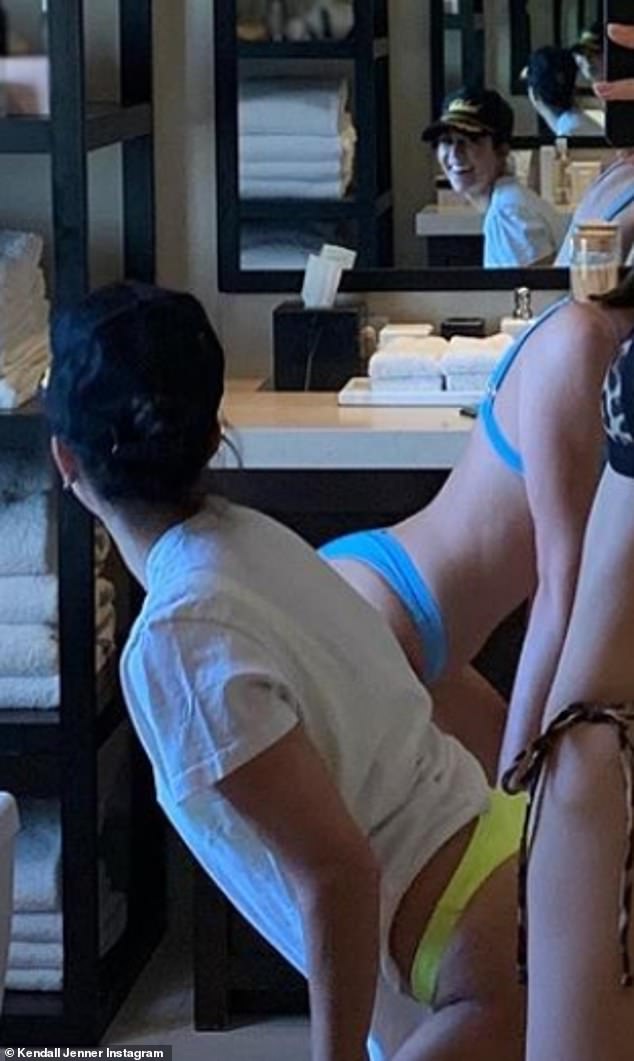 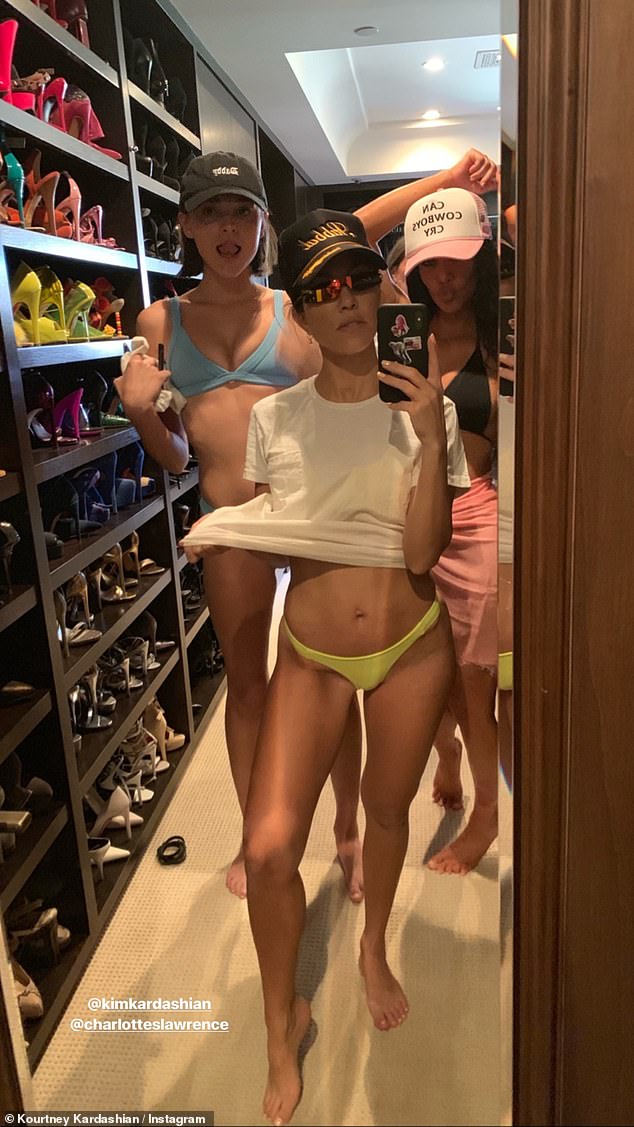 Another woman had on a blue bathing suit but her face could not be seen.

A third lady could be seen off to the side wearing a tank top and reaching for a book.

Before this post, Kendall was seen with her best pal Hailey Baldwin in New York City. They attended the opening of Edition Hotel's Times Square location on Tuesday.

The beauties both dazzled in plunging dresses with thigh-skimming hems.

Kendall opted for a short-short python print top which dipped all the way to her belly button and a skirt that had a ruffle on her hip by Ronny Kobo. She continued her look with sleekly styled hair, Maria Black Esther earrings and strappy brown stilettos.

Meanwhile, Hailey looked scintillating in a studded minidress which criss-crossed over her cleavage.

The wife of Justin Bieber pushed her blonde locks out of her face and donned double hoops for an extra touch of glam. She added black pumps with clear Lucite heels

Earlier the ladies teased their 'Girls night' in classic Instagram style, sharing a mirror selfie which was tagged with the hotel's name. 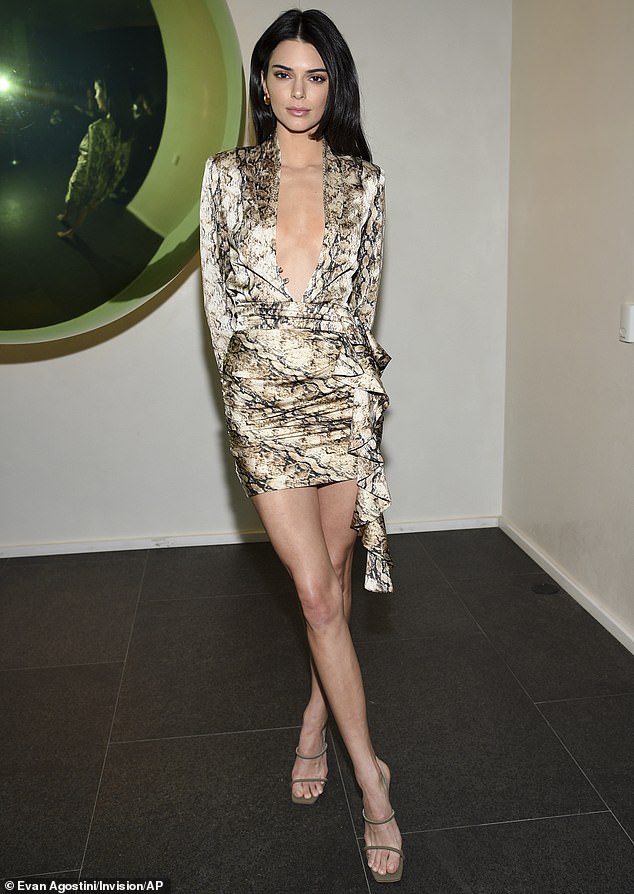 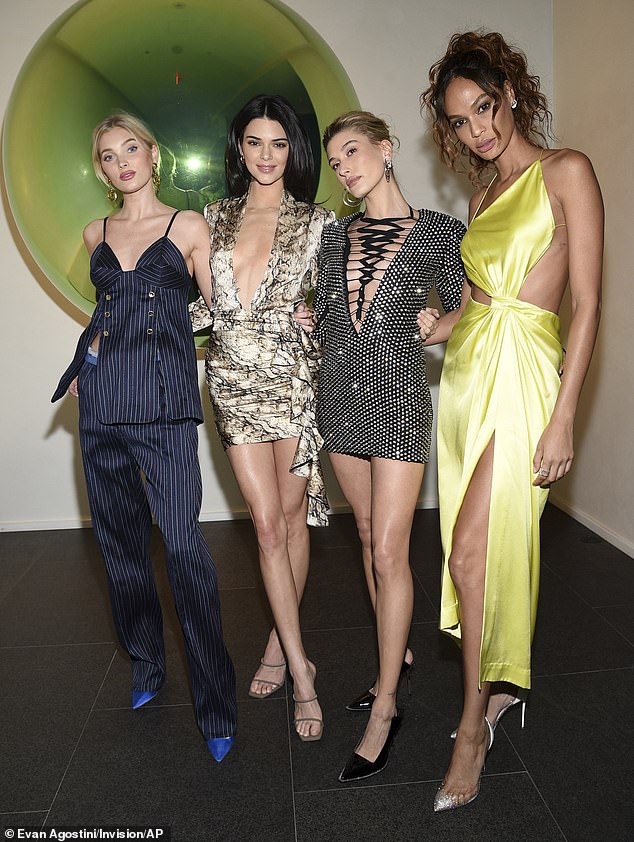 Hailey and Kendall weren't the only A-list models in attendance.

Stockholm-born stunner Hosk embraced a sexy twist on pinstripes, pairing a triangle topped camisole with silk loose trousers slung low on her hips to reveal a pair of briefs. She adorned her outfit with gold earrings and perfectly understated makeup.

Joan Smalls looked lovely in a citron yellow number which featured asymmetrical cut-outs on her sides.